The project brought together two groups in Cornwall, both made up of volunteers working to support and develop local heritage museums. The groups, based in the villages of Penryn and in Constantine, had an interest in the collection of oral histories. Penryn Museum had undertaken an extensive project some years ago during which 17 oral history recordings were added to the archive. The museum now harbours a ‘Talking Chair’, a comfy armchair that ‘speaks’ when you sit in it and whispers into your ear the stories of old residents of Penryn (or ‘Ryners’ as they are called locally). Volunteers for Constantine Heritage Collection have also recorded some local residents but at the start of the project were still looking for a way to incorporate it in the collection. Both groups of volunteers were interested to continue working with the recordings and make new ones. 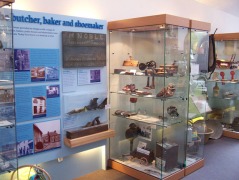 To make our joint recording, we got together several times, deciding on a topic and a form. We settled on the theme of the High Street, exploring both the past and possible futures. Both villages have relatively busy high streets. Further, both oral archives held amazing descriptions of these high streets in the past; with detailed descriptions of the different shops, their owners and some of the gossip that was passed on while shopping.

As a common thread we decided to record the past and present of the charity shops in the villages. The volunteers learned how to use a recorder, they decided on questions and main themes and went of to record previous and current employees at the charity shops. After that experience, we talked about what it is like to record, which brought us to think about other themes: how wonderful the old Cornish accents sound and how great it would be to make a piece about that.

Making the podcast then also involved others; we brought in volunteers that had recently worked with the local community radio station ‘The Source FM’ and had made the Penryn oral history recordings into 6 wonderful episodes. Recording volunteers’ experiences of collecting oral histories and producing a radio documentary, we hoped to convey some of their passion, as well as the importance of preserving memories and encouraging others to do the same. And bringing the two villages together to work on the project has resulted in a related benefit since Penryn Museum has allowed Constantine’s collection the use of a second Talking Chair.

LISTEN TO THE PODCAST
(The link will take you to another link which you will have to click as well in order to listen. And then be patient, as it takes a while to load…)